dinner in the boneyard 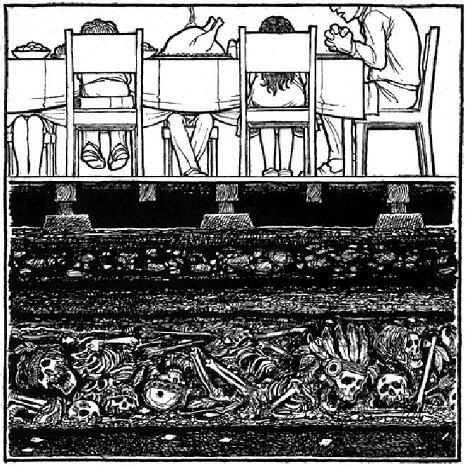 a light snow falls on the day before Gathering begins
more than a state sanctioned permission to gorge on food football family and friends
an instinct to gather and celebrate survival
the taming of the wilderness – ah, yes! there’s the rub!
celebrations of exterminations
the arrogant purposeful destruction of an indigenous race of people
in the name of Destiny and divine profit
our groaning tables weighing on the stones the bones
of the descendants of this land – “cut the bird & pass the mashed potatoes!”
what are you thankful for this year? too many things? or do you have to think hard?

the weight of betrayal sits heavy on the brow
of a celebration that should honour a communion
not built on broken promises
and the sorrows of a civilization not known or understood
convert or kill primitive slave material
driven out annihilated at the altar of Moloch!

and then here comes the new Pope, Francis
speaking words i never expected to hear from a Pope of the Catholic Church
and the conspiracy theorist in me has a million questions
why now?
why so antithetical to ratzinger? and why did ratzinger resign?
Popes don’t ever resign!
equivalent to the disgraced businessman/politician
who leaves his job to Spend More Time with his Family
but Pope Francis, Pope Frank
the Workingman’s Pope the Champion of the Poor the Scourge of the 1%
(they must be Stammering!
so unable to verbally abuse the Pope
who is saying everything that must be anathema
to the last more 40 years!)
and thinking people must Fear for him!
the trust (there is none)
is breaking between the governors and the governed
the threads unravel day by day like an old ship’s cable
rusting untwisting rotting separating from the whole the body politic
turning back on Moloch has ever been at one’s peril

a meal with loved ones can never pay the price of blood
but we acknowledge that the fertility of our present lives
depends on that ancient sacrifice
the food we eat
grown in the soil of those massacres
both bitter and sweet, the fruits of our Pride
we eat and drink and laugh at the Gathering time
to celebrate the Future on the bones of our Great Fault
how to honour the lost ones?
tell the story! break the myth!
reparations are due!

what can blindness ask of us but deeper insight?

Posted by wntrgrrl at 5:17 PM No comments: